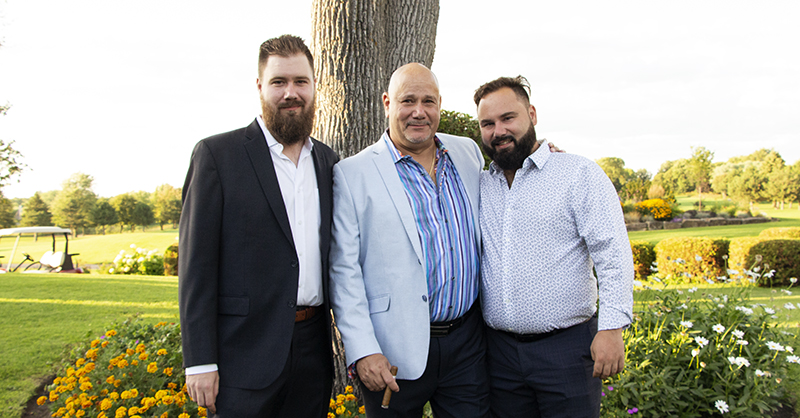 From labourer to boss

Before succeeding his father Saül Pomerantz at the head of the family business, Terry started there as a labourer, a summer job that taught him how to make a living while he was a student.

“It was my father Saul who gave me my first job and taught me how to work. It is a great honour to have earned his trust and to have succeeded him at the head of the company. My father Saül and my mother Alice are the two people I admire the most on this earth,” says Terry Pomerantz with emotion.

Entrepreneurs from father to son

Inspired by his father’s boldness, Terry Pomerantz has taken the family business to heights that Saül never imagined. Under his leadership, the real estate development and management company SP Holdings Canada became T.R.A.M.S Property Management, a vertically integrated group of companies with international reach. In addition, Terry acquired Domfoam, the polyurethane foam manufacturing company that his father had sold. Under his leadership, Domfoam International has been propelled to new horizons.

“A few years ago, it was my turn to hand over the management of the company to my sons Jonathan and Derick. Thanks to them, I can now devote all my time to the other pillar of the family legacy left by my father and mother, the Pomerantz Foundation. My father created this Foundation to help children who are unable to escape poverty, illness and difference,” says Terry Pomerantz.

The philanthropist who helps underprivileged children

“After living through the misery of the economic crisis of the 1930s and the Second World War, my father experienced prosperity. But he always remembered that it could have been different. He showed us how important it is to pay it forward. No one will be safe from misery and suffering as long as children suffer. As long as that is the case, I and my family and friends at the Pomerantz Foundation will help them.”

Terry has created a vast network of professionals, entrepreneurs and organizations around the Pomerantz Foundation, all working towards the common mission that Terry has instilled in them: helping children overcome their difficulties, helping women victims of violence to free themselves from it, helping underprivileged families to live better and helping children who are different to reach their full potential.

Last November, the Ben Weider Education Center Chabad Seminar of Canada honoured Terry Pomerantz at the Feast of the Nations 2019 gala. This honour was in recognition of all his charitable work.

Each year, several foundations and charitable organizations that work with sick and underprivileged children regularly recognize Terry’s contribution and that of the Pomerantz Foundation. These include Sun Youth, which provides emergency services to underprivileged families, Starlight, which creates invaluable memories for seriously ill children and their families, and the Yaldei Center, which helps children with distinct abilities develop their potential.

In fact, everyone with whom Terry and the Pomerantz Foundation collaborate is full of praise for them.

“Terry had always wanted to help underprivileged children. Several years ago, he explained to his mother that he wanted to organize events to collect donations. She told him: ‘Of course Terry, it’s an excellent idea! But tell me how much you need, and I’ll write you a check. That will save you from making a bunch of calls.’ Terry’s response to her was: ‘Thanks mom, but what I want is for the community to help the most disadvantaged among us, especially children. Yes, it’s a lot of work, but I want to get involved. Kids are too important!’ When I heard this story, I committed myself to help in the organization of the Pomerantz Foundation’s Golf Tournament and I give it my all!” See more…

“The program financed by the Pomerantz Foundation is particularly important for all these kids, who’s parents mostly do not have access to such services, due to the very long wait or because the costs in the private sector are prohibitive. The Pomerantz Foundation’s generosity allowed us to establish this speech pathology program, to ensure its operation and to make it accessible to children who need it.” See more…

“The Pomerantz Foundation is a truly exceptional foundation! The only thing they want is to make sure that the money they give us makes others happy. Terry trusts us completely. His aim is not to have his name on a bronze plaque. He comes to some of the events. He sees children who smile. We show him pictures. We tell him the stories of happy kids. All of it touches him and that’s enough for him. He says that we do our job!” See more…

“Without the Pomerantz Foundation’s financial support, the Center for Child Development and Mental Health of the Jewish General Hospital (JGH) would be unable to provide the current language therapy services to children who suffer from severe language difficulties, which can sometimes contribute to their behavioural problems at school and in society. We are truly blessed to receive such important financial support from benefactor friends such as Mr. Pomerantz.” See more…

“Since 2005, every year, Terry Pomerantz calls us personally to know if we have specific needs. Never did Terry Pomerantz nor the Foundation ask us for any kind of recognition. Their help is entirely selfless.” See more…

“I am lucky, very lucky to be able to help children and families who are struggling! My grandparents Alice and Saul were constantly helping children and people in need around us. They always said: ‘We’ve received a lot. It’s only natural that we share with those who are experiencing difficulties.’ When my father, Terry Pomerantz, asked me to get involved in the family foundation as an administrator, it was only natural for me to accept.” See more…